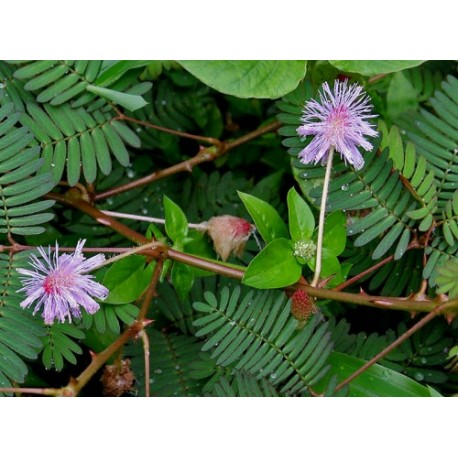 Mimosa piduca is more commonly known as sensitive plant and sleeping grass. It is an indigenous plant to Brazil and is normally grown as an indoor plant. It is given the name of sensitive plant because when the plant is touched, or disturbed, its leaves and stem respond by folding and drooping. Mimosa piduca grows to approximately 1 1/2 to 3 feet tall and produces 1-inch wide, pink, globe-shaped blossoms.

How to Grow
Step 1 Place the mimosa seeds into a bowl filled with very hot water, about 135 degrees F. Let the seeds soak for 20 to 30 minutes, or until the seeds show signs of swelling. Remove the swollen seeds from the hot water.

Step 4 Keep the soil in the peat pots moist by spritzing the soil in the pots often enough to keep them damp, but not overly wet. When seeds being to emerge, usually in two to three weeks, open the polythene to allow for ventilation. Maintain light and moisture levels until seedlings grow to about 2 inches in height, then transplant the mimosa seedlings into larger containers.

Transplanting Mimosa
Step 1 Fill a pot that is 5 to 6 inches in diameter with potting mix. Pack the soil down firmly in the pot. Pour water into the pot until the soil has been saturated.

Step 2 Scoop out soil from the center of the pot to make a hole that is 1 to 2 inches wider than the peat pot, but approximately the same depth as the peat pot.

Step 3 Cut off the top section of the peat pot, down to the soil level. (This will prevent any moisture loss after planting). Set the mimosa seedling gently into the new pot. Make sure the top of the root system is sitting at the same height as the soil in the pot.

Step 4 Hold the seedling straight in the pot while you scoop in potting mix until the hole is filled with soil. Pat the soil down firmly around the seedling. Water the pot until you are certain the soil is well saturated.