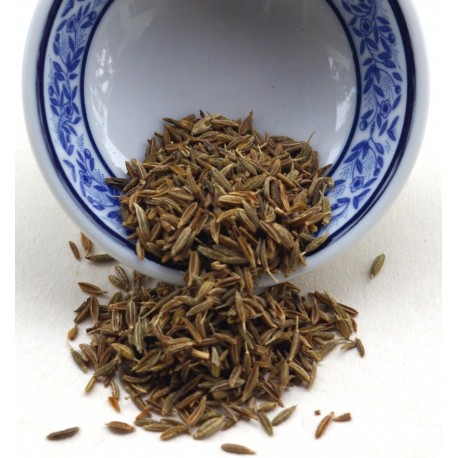 Edible Parts: Seed.
Edible Uses:
Condiment.Seed - cooked as a flavouring. Cumin seed was once widely used as a food flavouring in Europe, the Romans ground it into a powder and used it like pepper. It is little used at present in Western cooking, though it is much employed in India. A hot and aromatic flavour, it is an important ingredient in curries, and is also often used as a flavouring in biscuits, cakes and bread where it also helps in improving the digestion. The seed is harvested when fully ripe and is then dried and stored in airtight jars. An essential oil from the seed is used as a food flavouring

Physical Characteristics: Cuminum cyminum is a ANNUAL growing to 0.3 m (1ft) by 0.2 m (0ft 8in).
It is hardy to zone 8 and is frost tender. It is in leaf 10-May It is in flower from Jun to July, and the seeds ripen from Aug to September. The flowers are hermaphrodite (have both male and female organs) and are pollinated by Insects.The plant is self-fertile.

Cultivation details:
Tolerant of most well-drained soils, though it prefers a warm fertile well-drained sandy loam in a sheltered sunny position. A frost-tender annual plant, cumin has been cultivated for over 2,000 years in warm temperate and tropical zones for its edible seed. This is used mainly as a flavouring in curries etc, though it has also been employed medicinally. The plant only succeeds outdoors in Britain in warm summers, taking 3 - 4 months to ripen its seed. Another report says that the plant can ripen its seeds as far north as Norway. When bruised, the plant has a pungent aroma.

Propagation:
Seed - sow early spring in individual pots in a greenhouse. Grow the plants on fast, and plant them out after the last expected frosts. Give the plants some temporary protection such as a cloche for their first few weeks in the open ground to make sure that they keep on growing in the cooler weather of early summe